Help OnLine | OverSpread and not only Spread
3724
page-template-default,page,page-id-3724,ajax_fade,page_not_loaded,smooth_scroll,

OverSpread and not only Spread

How OverSpread is born

It was the 90s and I was entering the world of trading, a world that is strongly different from the current one in the technologies above all, which still did not give the opportunity to independent traders to be able to negotiate directly with a simple click. The phone call to the broker who negotiated the order was a must and between the request and the executed could also pass several hours.

This was the norm.

The world was without internet and the information we had and the exchanges of opinions had great limitations and we often explored, as a novelty, the methods that had already been pursued.

I state that at the time, among the various types of trading, Spread trading was performed or the purchase of a title and the simultaneous sale of a second title with the aim of gaining from the diversity of behavior of the two returns. For example, buying Fiat and selling BMW means having two titles from the same sector and thinking of making money from Fiat’s performance and BMW’s depression.

The first technique introduced in 1949 by journalist W. Jones, an alternative funds manager was of the Long / Short type, that is, he implemented the spread trading by buying a title and simultaneously selling another. The choice of titles was usually to give precedence to those in the same sector, because in general they tend to move in the same direction and among those, to buy the strongest (the one who does better than the others or outperforms, as they say in jargon) ) and simultaneously sell the weakest (the one that underperforms), dosing the quantities appropriately. This technique has become the strategy par excellence of hedge fund managers, or those who do not want to be one-way and cover part of the risk by opposing the underlying sold to the one bought.

The other technique, made popular by the great trader Joe Ross, was a substantial diversification of the previous one because although applying the system of opposing an underlying to another, Ross chose the pairs among the commodities; he had in fact realized that even the same type of product was influenced by seasonality and that therefore future contracts with different deadlines had different prices because there were different expectations, for example, of sowing or harvesting from month to month.

I implemented them both with the limitations of that time due to the difficulty of diversifying and “finding” prices for less common futures.

In those years, the demonstration of a phenomenon of cointegration between historical series of data, by two brilliant scholars of the time, Granger and Engle, years later awarded the Nobel Prize, had attracted my attention and, with the premises given me by the knowledge of the aforementioned techniques and integrating the brilliant intuition of the two Nobel laureates, I who was a financial consultant to one of the major humanitarian organizations, the REST in Toronto, presented and then implemented my innovative project that I had named OverSpread and now, almost twenty years later, I want to re-launch to highlight the leadership of PlayOptions in training in Italy.

I have always kept all my writings and my projects, some have turned into revisions while others have remained simple notes that, reread years later, can be, and have been, sources of other ideas. 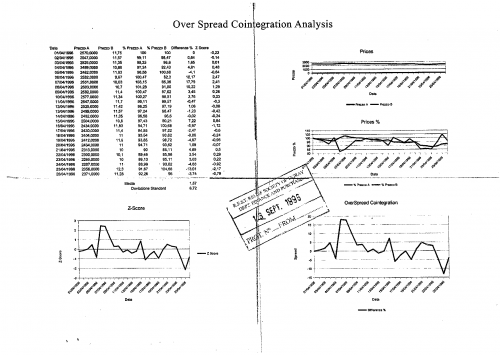 Above there is a part of the project that I mentioned earlier and that sends me back almost twenty years, the technology of that time makes you smile … but so much so and let’s look ahead, now there is beeTrader!

To illustrate my OverSpread, I had to minimize the learning difficulties and for this purpose, I realized beeTrader, a dedicated software, which will be your trusty mathematical helper, doing, he accounts and you simply click!

As you may have guessed, it is always a question of creating an arbitrage position composed of two titles, real or synthetic, one of which is Long and the other Short, but with a different method of matching, of choice for identifying the pair of underlying assets that have greater possibilities to realize the future trend in the direction we want.

Until now, we have mainly thought of the correlation between two instruments, that is, the relationship between two sets of returns, such that each value of the first series corresponds with a certain regularity to a value of the second.

Now it is a matter of thinking in a different way and instead looking for two sets of returns that move in a similar way in the long run, so much so that they seem to possess the same trend.

If one does not dwell on it, it would seem two similar things and instead they are decidedly different enough to state, and later I will prove, that two strongly correlated historical series are absolutely to be discarded.

It is not a writing mistake, it is just what we should do.

I understand that it may be difficult for the reader to disrupt the commonly read or commonly used concepts, but I tell you that the same thing happened when, the first in Italy, I explained that the options had to be dealt with mainly sold and not bought strategies.

To date, however, many fellow traders illustrate my own techniques in their courses.

A similar skepticism when I introduced the method of reading Open Interest and Smile of volatility: I fought against the habit, against those who did not want to understand that he taught a wrong method, that had changed because the rules had changed.

In the end my method, which was published as the Cagalli method, is universally recognized and adopted by traders with great enthusiasm, so much so that they often forget to mention me as the one who introduced it and demonstrated it. So don’t be afraid of innovation and read without any preconceptions.

It is certainly an innovation, even a revolution, but only with regard to use in trading.