beePrice Distribution offers the possibility to view the price levels and volumes traded for certain time intervals, thus obtaining information on the levels of support or resistance that have been created. It will also be possible to evaluate when these levels have been obtained and with how many exchanges,  also evaluating a measure of “strength”.

Through the Settings window, the display can be chosen in whole colored blocks or by letters of the alphabet, also colored. The blocks or letters group the prices at which exchanges take place in the time selected by the user. These blocks are called Convenience Point which for convenience we call CP.

The distribution of prices during the day will contain all the CPs obtained in the selected timeframe. That is, the distribution chart will have a first block (CP) or letter “A” which will correspond to the first price traded. This first CP will contain all the trades that took place in the selected price range and can be followed by other CPs with the same letter or color until the time selected in the Settings expires. At the end of this time, new blocks identified by the following letter with a different color will be added to the graph, repeating the same construction until the market closes.

From this moment a block (CP) of different color or letter “B” will be represented which will behave as described above until the timeframe expires to continue with a new block (CP) and a new letter … until the market closes.

In an 8-hour market, if we suppose we set the timeframe to 30 minutes we will have a distribution of blocks or letters which will be respectively: (8 hours / 30 minutes = 16) 16 different colors 16 letters of the alphabet (from A to P)

To the right of the letters there is a red asterisk and the symbol # to indicate the Last which at the end of trading will correspond to the Close.

It is possible to display labeled horizontal lines that correspond to:

You can also display colored vertical zones that correspond to:

And finally, you can view the histograms of the Volumes that can be set above or in front of the distribution.

Below is the description of the menu commands: 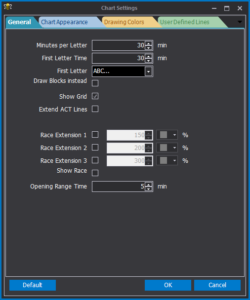 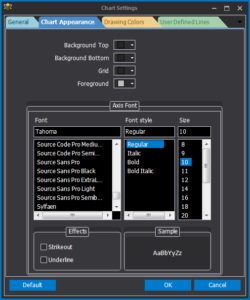 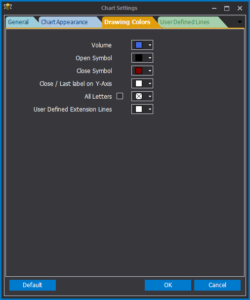 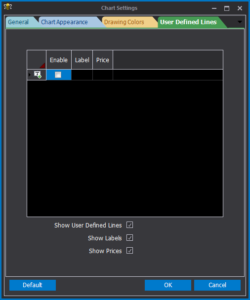 In this section of the Settings window the user has the ability to draw horizontal lines on the chart, can set the price level and,if needed, a label.

Good morning starts in the morning and so, if we accept this adage, the first hour of the market will give us the references for the day.

The price excursion that will be obtained and that we call RACE will offer the first two price levels keeping in mind that if it will be a large area (referring to the previous days) the supports and resistances will be particularly strong and the market will adapt for a lateral day .

On the contrary it will be a day in trend if the RACE is not very large.
In this case the 100, 150 or 200% extensions of the RACE time range will be broken in succession.

Characteristics of the days: 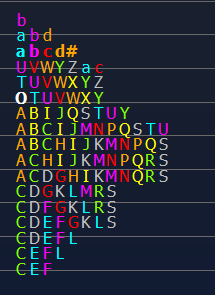 The logic of beePrice Distribution 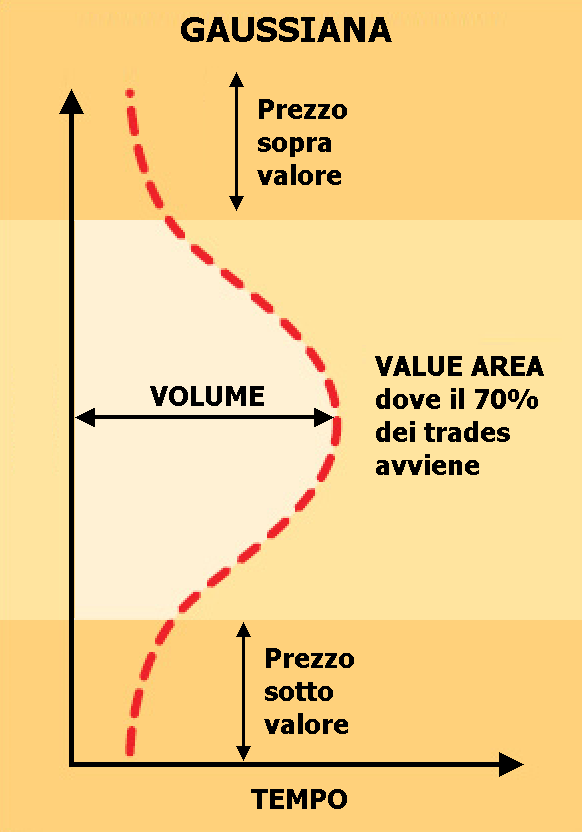 Unlike the most commonly used indicators, beePrice Distribution takes the data from each daily trading session and organizes it in such a way that it is possible to understand who is in control of the market and where the appropriate value is received.

We are used to seeing market data organized by time, price and volume. With beePrice Distribution the data values ​​have an extra attribute: it also takes the value “where” the prices were performed during the session.

All the information that is received starts from the axiom that in most days 70% of prices move within an area that is bounded by a Gaussian bell.

This area is the area of ​​Value, the area in which the majority of players agree in recognizing the fair value of the asset.

The beePrice Distribution therefore detects reference values ​​during the trading session. These values ​​are supports and resistances that the good and experienced trader manages to exploit to obtain information on the future direction (intraday) of the trend of the asset.